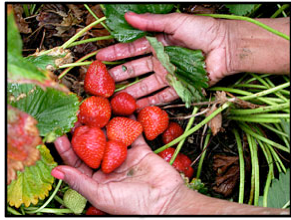 Thousands of migrant farm workers have moved into Skagit County’s ten labor camps this summer with hopes of plentiful work harvesting strawberries and other local crops. Many have found work. At the same time workers complain that more laborers and increased machine harvesting has meant far less work than expected.

“Yesterday we only worked two hours, and today nobody is working,” said Camilo Santiago glumly from the open window of his running car. He asked directions to Lynden, where he thinks he might find more work than what Sakuma Brothers Farms’ blueberry harvest allows.
“There are too many people and not enough work. Many people are leaving. They say the grape harvest is starting in California. We may be leaving too,” he continued.

There are many explanations for the larger numbers of farm workers this past season, from family reunification to the closure of two Oregon processing plants due to the forces of globalization. Over thirty new Triqui-speaking families from Oaxaca showed up this year from California. They joined family and neighbors who have worked Skagit County’s harvest for over six years.

“We came up from California, where we harvest apricots, tomatoes and other vegetables,” said Marcelino Raymundo, a burly Triqui-speaking man in his mid thirties who lay resting in his bunk after a morning of picking blueberries. When we came to where we normally work in Oregon, the camps were closed. Others were already filled up.”

Two Oregon fruit processing plants closed early in the season, depriving numerous strawberry growers of a market. Many chose to not even harvest their berries, disking them under or letting them rot in the fields. Farm workers on their way to their yearly Oregon destinations simply continued North, hoping for better pickings in Washington.

The Northwest produces a high-end specialty strawberry, known for its sweetness. High quality strawberries however come at great financial risk to growers. The Northwest’s colder and wetter climate usually means a fourteen to twenty-eight day harvest season that usually begins in mid June. Good weather and adequate labor are critical components in a successful harvest. A good market is even more essential.

The closing of processing plants in Oregon reflects a growing crisis in NW strawberry production. High quality Northwest strawberries are more expensive than strawberries grown in California and Mexico, where warm weather allows for a much longer growing season. Big companies out to increase their profits are increasingly unwilling to pay the price for Washington and Oregon’s higher quality berries. Many big multinationals out to maximize their profits are opting to save by purchasing cheaper and lower quality berries from California, Mexico and China, adding artificial coloring, sugar and other taste enhancers to make up the difference.

This year’s markets were so low that Northwest growers were unable to cover their production and labor costs. Production expenses including strawberry plants, fertilizer, planting and fumigating were between $.10-.15 per pound. Farm workers were paid an average of $.14 per pound. Haulers, checkers and other workers add as much as $.14 per pound of additional expense. Skagit Valley growers sold their berries for an average of $.32 a pound, far short of their actual costs.

Several local growers sell fresh market berries or operate their own processing plants, which helps increase their profits. Many smaller growers are especially vulnerable to low prices, and may well be going out of business. Raspberry prices were especially low, due to Bosnia’s increased production since the end of the war and Chile’s dumping of berries into the US market.

“The American Farmer is an endangered species,” says Jeanne Youngquist of Mike and Jean’s Berry Farm. She claims they decreased their strawberries by over 50% this year. American-grown food, our most precious resource, is now threatened,” concluded Youngquist.
Many farmers argue they must be increasingly astute with their labor force to avoid extinction.

“Larger numbers of workers is definitely an advantage to us,” said Steve Sakuma of Sakuma Brothers Farms. Large, efficient crews are able to move through a field quickly. This year nearly every strawberry was harvested. A stretch of warm weather combined with an abundance of workers permitted a record fourteen-day strawberry harvest.”

A glut of workers allowed local farmers to maximize both the size and the quality of their crews, which numbered as many as 375 workers per day at Sakumas. Worker efficiency is an increasing priority for farmers required to supplement worker’s income to meet Washington State’s minimum wage of $6.72 per hour.

Keenly aware of the abundance of workers, Sakuma Brother’s required pickers to harvest a minimum number of pounds per day to cover minimum wage, confiscating name badges of those who did not harvest the minimum.

Fear of losing a place in the field made workers especially speedy, both increasing their income while at the same time decreasing the time they worked.

Larger and more efficient crews clearly meant less work for farm workers -especially when weather kept berries from ripening fast enough to meet the needs of workers. Farm workers complained that machines were also being used instead of people to harvest blueberries and raspberries, leading to less work then anyone can remember.

“Next year many of the people from California will not come back. There is not enough work,” said Francisco, a Triqui-speaking man from Oaxaca living in one of Sakuma Brothers three migrant camps.
Without farm workers, many Skagit County growers could not continue operating. Yet if current trends continue, farm workers will clearly have less and less work to come back to as local farmers fight to survive.

American consumers themselves must be willing to pay the price for American-grown food in order for American agriculture to continue.