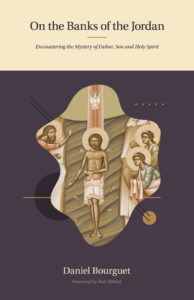 With joy I announce the translation from French into English and publication of Daniel Bourguet’s recent book On the Banks of the Jordan: Encountering the Mystery of Father, Son and Holy Spirit, The People’s Seminary Press, 2019—now available on Amazon. Daniel Bourguet was Gracie and my professor and continues to be our friend. He has written over 25 books, many of which are becoming spiritual classics. Below you will find a short excerpt from this inspired and timely book, which I highly recommend.

The Divinity of Christ

In my eyes John is a contemplative, which to me means approaching him with great respect. His gospel is the fruit of his contemplation, maturing in his heart over dozens of years. I am only going to discuss here its relation to the divinity of Christ, but this is an immense topic since the whole of the gospel, from beginning to end, revolves around just this theme…

“The Word was God”: what for John was the meaning of “Word” (logos) — which I make sure is capitalized along with “God”?

The same phrase is taken up again in v 14, where we read: “The Word became flesh and dwelt among us.” John speaks here not of an idea but a person: “he lived among us.” The following verses go on to give us the name of this person: Jesus Christ (1:17). In short, the Word who is God became the man Jesus.

We discover that for John, the name “Jesus” was the name he received at his birth, his name as a man. Before his birth John refers him to as “the Word,” specifying that “the Word was God.” I believe that John is here clearly stating the divinity of Jesus from before his birth, before he became flesh.

Did Jesus lose his divinity when he was born? Surely not, and the whole of the gospel shows us that his divinity is unseen, hidden in his visible humanity, right up to the point when Thomas was enabled to see it.

It is thought at times that Christianity has deified a man, a man so extraordinary, so magnificently human, so perfect, so holy, so exceptional that we have made a God of

him. The divinity of Christ would therefore be a production of the first Christians, a work of the Church. If this is so, it would mean taking a man for God, making a man into God, and this would be pure blasphemy.

If this is not the case, it might also be thought that it was God himself who made Jesus a God, perfect man that he was and corresponding so completely with God’s desire; thus God crowned him, deifying him to sacralize his merits. This is all just as wrong.

The truth is that it was not a case of a man becoming God but of God becoming man, and this is what John says: “The Word became flesh.” This means that the Word who is God became flesh, which is to say, a man. This is not the exaltation of a man but the abasement of God.

In introducing his gospel with the expression “in the beginning,” John was wanting to return to the opening words of the Bible in Genesis. There is nothing we can say about anything that took place before “the beginning” because the Bible says nothing about it and it is beyond us. This is the absolute mystery of God

The opening of the gospel presents Christ in his divinity with a certain solemnity:

The purpose here is not to call us to delve into the mystery but to celebrate it in adoration. To John, Christ’s divinity was not a preliminary hypothesis which had to be demonstrated and proven; no, it was an affirmation which there was no point investigating because it was a conviction that lay at the heart of his faith. His gospel simply lays out the nature of this conviction as a celebration of mystery and faith. Moreover, this is just what he says to his readers at the close of the episode with Thomas in a statement we are to receive as the conclusion of the gospel as a whole:

“These things are written that you may believe that Jesus is the Christ, the Son of God, and that in believing you may have life in his name” (20:31). This is a matter of faith and this faith is to be celebrated. (p. 41-43)

You can order On the Banks of the Jordan here.