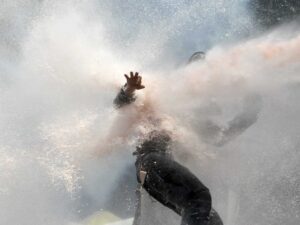 Last October I had a vivid dream exposing racial violence at the heart of the Christian community that I’ve been pondering ever since. Now in the aftermath of last week’s killing of George Floyd, amidst national-level protests, and Donald Trump’s holding up a Bible after dispersing a crowd of peaceful protesters with rubber bullets and tear gas, I feel especially compelled to speak.

My dream took place in the middle of the night before the final day of the 24/7 International Prayer conference in Belfast, Northern Ireland on October 27, 2019. The conference brought together over 1000 people from 29 countries for worship, prayer, talks and workshops on topics related to prayer, mission and justice.

Just before Belfast I’d enjoyed a personal retreat at Taizé, an ecumenical spiritual retreat center which draws thousands of young people from around Europe. That night I toured the wall that separates Protestant from Catholic neighborhoods in Belfast, being struck by murals on the Protestant side glorifying the military. My ensuing dream was as vivid as an actual lived experience.

In the dream I move from a big Christian worship setting to suddenly find myself standing on a dirt road in front of house in an idyllic rural town. I hear children humming and singing worship songs as they walk into town from my left, which I recognize from worship conferences I’d just attended.

I notice they are White children, and watch them turn and walk merrily up a driveway to one of the houses off the main road. I think to myself how great it is that they have benefitted from such quality Christian input from these conferences, and wish my own children could have benefitted when they were young.

Suddenly I am interrupted by a disruption down the road to my right, towards the center of town. I look and see a group of White men I assume to be the fathers of these children, dragging a shirtless Black man along by his arms.

The men drag him into the town square, and force him into a pond in the center of town, up to his waist in water. The men divide into two groups, each group holding the Black man’s arms stretched apart. A White man approaches with a thick green garden hose, and begins spraying his chest, face, mouth and eyes with high-powered water. The men hold a big piece of plastic behind the Black man’s head, making the water hit against the back of his head. The man looks desperate and afraid, but is unable to break free.

I watch in shock and then begin walking quickly down the road out of town– in the direction the children had come from. I think that I must call 911 (the police), and then decide to get off the road so the men can’t see me since I am the only outside witness I know of.

I head up a big hill, towards higher ridges when suddenly I’m face-to-face with two people on their way down. They tell me there is a heavily-watched wall and tower on the ridge above, and everything I do will be under surveillance.

I feel intimidated, but think again that I must call 911– though I remember thinking it will probably not make a difference. In the end I’m not sure I ever called, but think I did.

Then I am suddenly right in the center of the town at the crime scene— standing on the road in front of the pond. Everything is disturbingly quiet, cleaned up and set in order. The water is calm and the scene idyllic. The grass is cut short around the pond, like a golf course green. I see the piece of blue plastic that was held behind the man’s face and body when they were spraying him, set upright in front of the beautiful pond.

Two of the White men are working in their yards behind me. I nod towards them and they notice and barely acknowledge me, continuing their work. I notice ear buds in their ears. Had the police come? There is no sign that law enforcement had been there. I wonder where the Black man is. Is he dead or alive? I remain silent as I ponder, and then the dream ends and I awake disturbed, unable to sleep the rest of the night.

I think back to that dream of brutal, racial violence used to silence and intimidate– enacted by White men at the heart of what looked like an idyllic White Christian community. In the dream the men appear united in mob violence against a lone individual who is the only one unlike them—a Black man who has become their victim.

As a White man, I am able to re-enter the town and stand before the crime scene with no questions asked. What I see is that towns people’s biggest concern appears to be their property, and the maintenance of their beautiful, ordered community.

As the only outside witness, I feel powerless to effect change. I am far outnumbered by the men, who I hadn’t attempted to confront. Whether I report the crime to the authorities or not seems to make no difference. This is a normal reality to people of color. How should we respond?

Right now protests in the United States and across the world are exposing police brutality and institutional racism. We must continue to insist on deep structural changes. We need to make sure changes are implemented, supporting efforts like Campaign Zero’s “8 Can’t Wait” and efforts to confront and change racial profiling. People of color must be able to call the police and expect protection and fair treatment—with no fear of being killed by a fearful or trigger-happy cop.

We need justice in our courts, where prosecutors and judges reign supreme, meting out unjust sentences and leveling impossible-to-pay back fines. These injustices must now be exposed and uprooted, and minimum-sentencing laws (and many other laws) must be changed. We have witnessed judicial injustice beating down people of color and White people too our entire 26 years of jail and prison work here in Washington State.

Let’s examine our own hearts, confessing and turning away from racism and White supremacist mindsets. We must refuse and denounce all attempts to co-opt Christian faith to justify violence or law and order, like President Trump’s June 1st dispersion of a crowd of peaceful protestors with rubber bullets and tear gas, so he could pose with a Bible over his head in front of a church. That the Bible was upside down is both symbolic and real—and followers of Jesus must read it right-side-up, with open eyes and love-filled hearts towards the suffering world.

Our children and young people need to come home to families where repentance and courageous truth-telling are the norm, and sent out of our worshipping communities as compassionate, anti-racist change agents. I am deeply moved by the thousands of young people hitting the streets in protest across the United States—including in our own small town of Burlington on Thursday. There I joined a mostly White and Latino group on Burlington Boulevard, holding my Black Lives Matter sign as cars and trucks honked their support.

Now is the time to expose and uproot the sin of racism and prejudice, and engage in informed solidarity with people of color in our communities. May the Holy Spirit guide us into all truth, giving us courage for this important work. 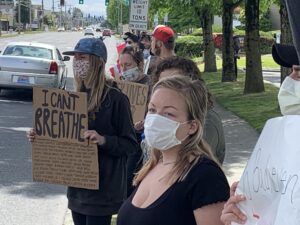