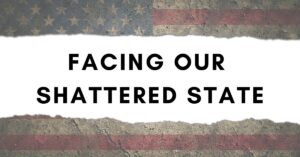 I was struck by the relevancy today of Isaiah’s prophetic words to God’s people prior to the destruction of the nation of Israel and their exile in 587 BC.

This is the situation here in North America. Our Western societies are in rapid decline: greed, corruption, depravity, bitterness, and division abound.

We need to be shattered to the point of authentic humility, because our not-yet-shattered state is bringing chaos at nearly every level. Baptismal death is necessary for resurrection life to emerge out of the rubble.

The United States and its Western allies continue to harvest bitter fruit from their latest efforts at nation-building: Iraq and Afghanistan. People’s belief in military might and expertise has been exposed as futile and pathetic. The United States’ self-interested foreign interventions are not only visibly ineffective, but bring division, corruption, death, and destruction. This is becoming more obvious from day-to-day, as lives continue to be lost and chaos ensues in Afghanistan. The world is seeing so clearly that America is an impotent, false savior.

The rapid victory of the Taliban in Afghanistan this month, despite the US military’s spending of $83 billion and 20 years of training and equipping the Afghan army (under Republican and Democratic-led administrations), exposes the US and its allies’ incapacity and bankruptcy (see Rachel Tecott’s article “Why America Can’t Build Allied Armies,” Foreign Affairs, Aug 26, 2021).

The failure of the president of Afghanistan, Ashraf Ghani to effectively rebuild and govern exposes the failings of Western education, expertise, strategy, and US backing. Dr. Ghani held a PhD from Columbia University and wrote the book, Fixing Failed States: Rebuilding a Fractured World.

America’s domestic situation continues in disarray, reflecting how money and education are also incapable of rebuilding our fractured nation. The United States’ most prosperous cities (Seattle, San Francisco, Los Angeles) are filled with homeless encampments. The Seattle area is home to many Fortune-500 companies, including Amazon, Starbucks, Nordstrom, Weyerhaeuser, Expeditors, Costco, Alaska Airlines, as well as giants like Microsoft, Expedia and Boeing. Business and technical competence and wealth abound, yet the downtown to the peripheries are filled with people visibly struggling with homelessness, addictions, poverty and mental health disorders. In major cities across the USA there are myriads of visible, daily reminders of the failure of our nation to effectively care for its own. Added to this are the continuing Covid and opioid epidemics, and the ongoing reality of mass incarceration. What will it take for people to finally acknowledge our broken, shattered state?

“Be shattered, for God is with us!” writes Isaiah prior to Israel’s destruction by the Babylonians and consequent exile. Not a normal message of comfort and love, but a call to extreme humility.

Isaiah’s message is extreme realism. We must honestly face our personal and corporate incapacity, bankruptcy and brokenness, and God is with us as we do this. But this means breaking with those who are stuck in denial, self-justification and blaming.

“For thus the Lord spoke to me with mighty power and instructed me not to walk in the way of this people,” continues Isaiah (Is 8:11).

What does it look like today for followers of Jesus to “not walk in the way of this people?”

May each of us humbly and prayerfully consider this question. Isaiah continues to wax eloquent:

“You are not to say, ‘it is a conspiracy!’ with regard to all that this people call a conspiracy, and you are not to fear what they fear or be in dread of it. It is the Lord of hosts whom you should regard as holy” (Is 8:12-13).

Isaiah calls God’s people away from fear, and from false narratives and idolatry. Wholesale allegiance to God is the simple, radical and only way forward.

False prophets are calling for Christians to arise and get politically involved, making our government this way or that way, before it is too late. It is already too late, and government reform is important but will not solve our biggest problems. As Isaiah states: “Devise a plan, but it will be thwarted. State a proposal, but it will not stand.”

Making America or any nation great again is not the way of Jesus, and Jesus himself certainly did not promote the Roman Empire or support Israelite nationalism. Jesus-followers are called to announce the “Gospel of the kingdom”— a “kingdom not of this world,” though fully “in the world.”

“And he (God) you shall fear, and he shall be your dread. Then he shall be a sanctuary, not to the houses of Israel, a stone to strike and a rock to stumble over, and a snare and a trap for the inhabitants of Jerusalem.”

John the Baptist was another prophet who prepared the way of the Lord, who showed up in Jesus of Nazareth- a stumbling block for many. John preached a “baptism of repentance for the forgiveness of sins” (Mk 1:4). People came to him, confessing their sins.

Immersion in the waters of the Jordan represents death to the old self, and cleansing from sin. Coming up out of the baptismal waters is a restart- a new beginning, free from their old allegiances. There’s a new availability to receive the Holy Spirit and step into true identity as a son or daughter– each one ready to begin eternal life. Many came to receive John’s baptism, but some didn’t. May we choose to die again under the waters of baptism, agreeing to “be shattered,” which is the pre-requisite to the resurrection life.

Consider joining us for a new cohort of our Certificate in Transformational Ministry at the Margins which addresses questions like these, designed for those already serving (or feeling called to pioneer work) amongst poor and marginalized communities. This 12-week CTMM 2021 Module 1 training begins Sept 28, Tuesdays 12:00-1:30pm (PDT).