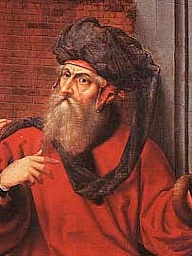 Abraham and Sarah, the founding couple of Judaism, Islam and Christianity need to be rediscovered and followed out of Babylon into a new way of thinking outside the impasses of USA, Israel/Palestine and Islamic nationalism. Today when “us-them” distinctions have never been more destructive, those who claim to follow Jesus must be clear about our identity as bearers of Good News to all people. Focus on the particularities of our heritage as heirs of the promise given to Abraham and Sarah must be balanced with the deeper meaning of our founding stories in sacred Scripture.

In this time of war, Christians and Jews must remember that Abraham and Sarah, the patriarch/matriarch of the Jewish people and of Muslims and Christians, were both from a place that is now Iraq. Indeed, Terah, Abram’s father left Ur (Gen 11:31) of the Chaldeans, a town in Iraq SE of Babylon, on his way with his family as immigrants to Canaan. While Terah did not make it out of Iraq, settling in Haran (Gen 11:31), Abram received his call from the heart of what is now Iraq. The Lord (YHWH) called Abram:
“Go from your country and your kindred and your father’s house to the land that I will show you. I will make of you a great nation, and I will bless you, and make your name great, so that you will be a blessing… in you all the families of the earth shall be blessed” (Gen 12:1-4).

Abraham was called to leave his nationality, ethnicity and family for a new place that the Lord would show him. Abraham and Sarah were called to break allegiance with the particulars of their identity, following a God who promised to bless them so they would be a blessing to all the families of the earth. Yet the particularity of Abraham and Sarah as Iraqis and Jews is not lost.
When exiled to Egypt, Abraham and Sarah were believed to have acquired an Egyptian slave, Hagar, who bore Abraham, Ishmael (50% Egyptian and 50% Iraqi), YHWH blessed Hagar and Ishmael (Gen 16, 21), but insisted that the child of the promise would be from Abraham and Sarah– 100% Iraqi!? The Jews then clearly are linked to Babylon/Iraq by blood, and are inescapably brothers and sisters with their Arab/Muslim enemies.

On the other hand, God clearly called these Iraqi/Jews to a universal mission that goes far beyond narrow ethnocentric, nationalistic, ideological or religious agendas. Abraham and Sarah were called to leave their nation/ethnicity/family and land– heading off by faith to a land that YHWH would show them. God called them to leave and to follow, assuring them that they would be blessed and that through their descendants all the families of the world would be blessed. This is the true vocation then of the Jewish people, and of their Iraqi ancestors. This vocation to be a universal blessing is at the heart of all heirs of the promise to Abraham and Sarah, whether they be Jews, Muslims or Christians.

Babylon/Iraq has its dark side in the sacred story that must not be overlooked. Imperialist Babylon invaded Judah, slaughtering people, destroying the Jewish temple, and carrying off thousands into exile. The prophets warned the people of Judah that God’s judgment would come as a natural consequence of disregarding their true vocation as God’s people. Israel had been lured away from total allegiance to God by the seductive idols of that time.

The children of Abraham and Sarah abandoned their universal mission, which was evidenced by the growing gap between the rich and the poor, abuse of foreigners, exploitation of the poor and the unrestrained accumulation of wealth. Yet there in Babylon (Iraq), the Jewish people experienced God’s revelation and blessing. In exile they compiled and edited the Hebrew Scriptures, developed elaborate oral traditions which later served as the basis of Judaism (the Babylonian Talmud) and prepared for a new departure, an exodus to a new way of life and liberation inspired by Abraham and Sarah and the Exodus from Egypt. They returned to the land to try once again to be faithful to their original vocation on behalf of every family on earth.

All who follow the narrow path of faith are included as sisters and brothers of our Iraqi predecessors, Abraham and Sarah. The Apostle Paul argues in Galatians 3 that “those who believe are the descendants of Abraham” (Gal 3:7) as “those who believe are blessed with Abraham who believed” (Gal 3:9). Non-Jews are brought into the universal family of God not through adherence to the particulars of the Jewish law, but by grace through the life, death and resurrection of a very particular Jewish law-breaker—Jesus of Nazareth. This “descendant of Abraham” (Gal 3:16) realized Iraqi Abraham and Sarah’s vocation, saving the world from the “us-them” distinctions that come through clinging to particularity over the larger universal picture. “In Christ Jesus you are all children of God through faith… there is no longer Jew or Greek, there is no longer slave or free, there is no longer male and female; for all of you are one in Christ Jesus. And if you belong to Christ, then you are Abraham’s offspring, heirs according to the promise” (Gal 3:28).

All children of Abraham and Sarah are beneficiaries of God’s promise of blessing which must be passed on freely to all the families of the earth. This is a universal, borderless blessing that far exceeds any nationalistic idolatries. The requirement: leave nationality, ethnicity and family allegiances and join God’s universal human family—the reign of God.
The heart of the Lord’s prayer is for God’s Reign to come and will to be done on earth as in heaven. In stark contrast to this prayer are current nationalistic agendas, visible in Israel, Iraq and in the U.S.A. The leaders of the United States of America claim to have a mandate supported by the majority of U.S. citizens and even from God to impose their “enlightened” will on the rest of the world. Many Christians and Jews support the Bush Administration, believing that war, violence, economic sanctions and a host of coercive measures are justifiable and even God’s will. While Iraq’s leaders have an oppressive record and are far from embodying the faith of their ancestors Abraham and Sarah, the USA must recognize that we are in grave error too.
The USA’s attacking of the departure point of Judaism, Christianity and Islam makes it clearer than ever before that the new Babylon is now out to completely replace the old—establishing itself as the self-declared global deity. This action represents the limited self-interest of a wealthy elite, with no thought to the universal mission and saving way of the suffering Messiah, Jesus– the most total, realized descendant of Abraham.

God’s descent from power and privilege into human flesh in Jesus Christ shows us a very different way of life-giving service on behalf of the least (Phil 2:1-11). Jesus’ giving of his life on the cross shows us the means and the person through whom universal salvation is accomplished. While Jesus’ way of the cross clearly looks like weakness and foolishness to those who are on their way down (perishing), the Apostle Paul is audacious in his insistence that Jesus reveals the power of God (1 Cor 1:18). “For God’s foolishness is wiser than human wisdom, and God’s weakness is stronger than human strength” (1 Cor 1:25).
Christians cannot claim from Scripture that violence and war are justifiable. Nowhere in Jesus’ teachings is violence justified, nor are traditions from the First Testament (the “Old Testament”) that apparently support violence embraced by Jesus. Rather, Jesus and other New Testament writers consistently distinguish between flesh and blood enemies and spiritual enemies. Jesus clearly distinguishes spiritual enemies who he combats with violence (breaking down dividing walls, abolishing the law, and putting to death hostility (Eph 2:14-16), subjugating principalities and powers and destroying death (1 Cor 15:24-27)) from enemies of flesh and blood (human beings like Saddam Hussein, Osama bin Laden, members of al Queda or George Bush for that matter) who he calls us to love and pray for (Mat 5:38-48). “But I say to you that listen,” says Jesus, “love your enemies, do good to those who hate you, bless those who curse you, pray for those who abuse you (Luke 6:27-28) (See also Romans 12:14-21). “For our struggle is not against enemies of blood and flesh,” writes Paul, “but against the rulers, against the authorities, against the cosmic powers of this present darkness, against the spiritual forces of evil in the heavenly places” (Eph 6:12).
Make no mistake, the way of Jesus is a very different way. Prayer, Scripture study, worship and other forms of spiritual resistance together with the building of a new community in the midst of the old are all arms for the struggle. We are warned that this narrow way may well lead to persecution, resistance, and even to death. Yet we are also assured that this way is the only way to true victory, life, and resurrection.

Now as the new Babylon literally replaces the old, Christians must listen attentively to the imperatives of Revelation: “Come out of her, my people, so that you do not take part in her sins, and so that you do not share in her plagues, for her sins are heaped high as heaven, and God has remembered her iniquities (Rev 18:4-5).