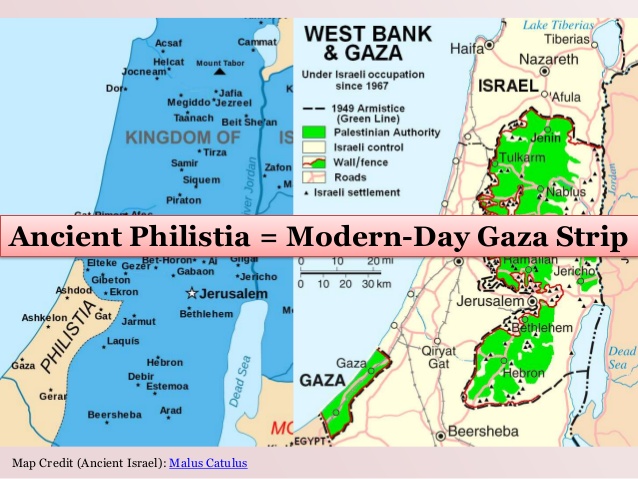 Violence in Gaza is once again on the rise as the Israeli Defense Forces battle Palestinian protesters outraged by inhumane living conditions in what is often referred to as the world’s largest outdoor prison. The last time tensions flared Israel brutally bombed Gaza in response to Hamas’ missile attacks in 2014— killing over 2000 Palestinians and wounding thousands more. The story of Abraham’s conflict and reconciliation with the ancient king of Philistia (located in modern day Gaza) in Genesis 20-21 is an invitation to Jews, Muslims and Christians to see each other through the eyes of faith.

Genesis 20 tells the infamous story of Abraham’s residence as an alien in Gerar, where he lies to Abimelech, king of Philistia, about the identity of his wife Sarah, saying she was his sister. Abraham expects the worst from this foreign king, assuming he will kill him and take Sarah for himself– since she is so beautiful. But after Abimelech takes Sarah into his harem God confronts him in a dream and Abimelech proves attentive. He dialogues with God, defending himself as innocent– and God affirms his integrity (20:5-6).  Abimelech confronts Abraham about his lie: “You have done to me things that ought not to be done” (v. 10). He gives Sarah back along with many gifts, 1000 pieces of silver and a welcome to settle wherever they please (20:14-15).

Abraham clearly misjudged Abimelech in assuming he and his people did not fear God. Deep prejudices and hatred abound today on all sides of the current Israeli-Palestinian conflict—and this text from the Torah offers a prophetic challenge. Might we consider asking God to give us a divine perspective on people and conflicts?

Abraham prays for Abimelech’s wife and maids, who God had kept from getting pregnant until things were resolved with Sarah—and their wombs are opened. Abraham is a blessing to this non-Jewish leader, in keeping with God’s people’s vocation: “through you all the families of the earth will be blessed” (Gen 12:3).

In the next chapter, Isaac is born, and Abraham sends Hagar and Ishmael into the desert– a text dear to Muslims. Abraham is their patriarch and the well that God shows Hagar they identify as located in modern-day Mecca.

Immediately following this story in Genesis 21:22-34, Abimelech and Phicol, the commander of his army, approach Abraham. They recognize God’s presence with him, saying: “swear to me here by God that you will not deal falsely with me, or with my offspring, or with my posterity; but according to the kindness that I have shown to you, you shall show to me, and to the land in which you have sojourned.”  And Abraham says, “I swear it.” (21:24).

While there are no known ties between Abimelech and modern day Palestinians living in Gaza, Abraham’s covenant to not deal falsely but rather kindly with the residents of Philistia seems highly relevant to Abraham’s Jewish and Muslim descendants in Gaza and throughout the West Bank today.

In the next story we see that Abraham and Abimelech’s covenant is tested by conflict, and Abraham models healthy peacemaking. He complains to king Abimelech about his servants, who seize his well. Abraham offers sheep and oxen as gifts and the two of them make a covenant (21:30). Later in Genesis 26:1-30 Isaac has a nearly identical run-in with Abimelech (perhaps the first Abimelech’s son), making a similar covenant with him. This story appears to emphasize the Jew’s special responsibility to keep and renew this covenant from generation to generation.

Gracie and I became aware of this story during a life-changing visit to Israel and the West Bank for three weeks in 2014. We began our trip by spending a week in Bethlehem, East Jerusalem and Hebron, learning about the Israeli-Palestinian conflict from the Palestinian perspective. We witnessed firsthand Israeli soldiers shooting rubber bullets into a crowd of Palestinian protesters. We toured impoverished Palestinian communities trapped behind the formidable border wall or under the shadow of heavily-fortified Jewish settlements in East Jerusalem and Hebron.

We then rented a car and traveled past Gaza into the Negev, and visited Abraham’s well in Beersheva, a mere 27 kilometers from Gaza City. At that time Hamas was beginning to shoot rockets into Israel from nearby Gaza. Before heading to Beersheva I called a Messianic Jewish leader I had met a few years before at a conference in Paris. He welcomed us into his home and he shared his perspective on the Israeli-Palestinian conflict. Gracie and I then headed to a local restaurant for some lunch before our planned visit to Abraham’s well.

The young Israeli waitress who took our order asked Gracie what we were doing in Beersheva. When she heard we planned to visit Abraham’s well she surprised Gracie by saying:  “Be sure you go into the cistern, the Presence of God is really strong down there.” We learned that she believed in Jesus, and was active in the Messianic Jewish house gathering of the man we had just visited. She gave us the phone number of a woman from her fellowship who she said knew a lot about Abraham’s well and might be willing to meet up with us. We were excited by this unfolding adventure and called her. She offered to meet us briefly at the well.

There in the parking lot of the ancient Beersheva ruins she told us that Abraham’s well was actually the first piece of land that was owned by the Jewish people. She believed that the now empty cistern was symbolically important, but didn’t tell us why. She repeated what our waitress had said that the Spirit was especially strong in the cistern, and prayed for Gracie and I before we spent a few hours touring the ruins. It was then that Gracie and I read Genesis 20-21 and 26 together, and began reflecting on these questions.

That same day we continued eastward, visiting the Fountain of Tears. We were deeply impacted by this series of sculptures depicting Jesus’ final words from the cross, each one before a Holocaust survivor dressed in prison clothes. Our guide, himself a Messianic Jew, shared his conviction that Jesus’ suffering and death as the descendent of Abraham is what breaks down the dividing wall between Jews and gentiles, Israelis and Palestinians (Eph 2:13-18).

According to Paul’s writing in the NT, believers in Jesus Christ are grafted into the Jewish people, becoming “children of Abraham” through faith in Christ (Rom 4:19).

Jesus told his Jewish listeners to do the deeds of Abraham (Jn 8:39). He commanded his Jewish disciples and all who follow him today: “But I say to you who hear, love your enemies, do good to those who hate you” (Lk 6:27).

Tensions are rising in the Middle East— between Israelis and Palestinians, between Israel, Syria and Iran– and in many other places as well. Superpowers are aligning themselves, funding and arming enemy camps for war.

May we resist partisan divisions and violent approaches—actively praying and working for peace in alignment with Jesus—the Prince of Peace. May we step more  fully into the “ministry of reconciliation” that Jesus has given us: “Namely, that God was in Christ reconciling the world to himself, not counting their trespasses against them, and he has committed to us the word of reconciliation” (2 Cor 5:18-19). In so doing we will experience the benefits of Jesus’ promise: “Blessed are the peacemakers, for they shall be called the sons and daughters of God” (Mat 5:9).