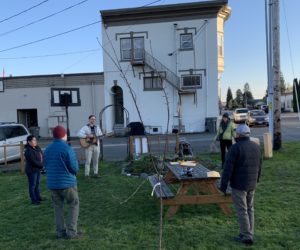 Over the past week our normal ministry commitments have been radically reduced due to the rapid escalation of the COVID-19 epidemic here in Washington State and around the world.

The jail and prison have closed doors to ministry.  We’ve moved our weekly Tierra Nueva gatherings for worship online. Our April commitments to teach in Zambia, South Africa, Sweden and Switzerland have all been postponed until the Fall due to corona-related border closures. Closures of health clubs, schools, recovery meetings, cinemas, restaurants are forcing people to do what’s recommended—to stay home.

What’s a follower of Jesus to do in these precarious times?

The only time Jesus’ disciples went home was after Jesus was crucified and buried, when they “as yet did not understand the Scripture that he must rise again from the dead. So the disciples went away again to their own homes” (Jn 20:9-10).

The Scripture that comes to mind as I contemplate these times is Acts 8:1, which describes that persecution that began after Stephen’s martyrdom, “and they were all scattered through the regions.” The gathered believers could no longer gather—and Philip went to Samaria, “proclaiming Christ to them” (Acts 8:4). This resulted in crowds attentively listening, witnessing signs like unclean spirits leaving, paralyzed and lame being healed and “much rejoicing in that city.”

Now is an opportunity for those scattered from normal gathered communities to consider the Spirit’s clear guidance—wisely discerned.

Right now across the world, the homeless, those struggling with mental health disorders, and addictions, and others in active recovery people are especially vulnerable to COVID-19.  As churches, homeless shelters, restaurants, and casinos close their doors, these populations are in many cases feeling abandoned.

This past Wednesday we put a call out for people interested in ministry to gather at Tierra Nueva with a plan to walk the streets, seeking to find vulnerable people and share information about the virus and what they can do, and offer to pray.  We printed up hundreds of copies of a half-sheet flyer in English and in Spanish with the health department’s colorful poster outlining key recommendations on one side, and Psalm 91 and Luke 18:38 on the other.

Six of us showed up, gathering outside our Tierra Nueva building in Burlington in a circle, keeping the minimal six feet distance. We sang a worship song, prayed together and then put on gloves, equipped ourselves with face masks and hand sanitizer before deciding together which areas of our valley we planned to cover for an hour of outreach.

Salvio and Victoria headed for Walmart to look for Spanish-speaking immigrants, who are especially in need of information and encouragement. Roger and Andrew made rounds, looking for, finding and praying for people under the freeway bridge and in the laundromat. Gracie and I drove around and prayed for the people of our valley—leaving off Spanish flyers at a Mexican carniceria (butcher).

Last night I went out by myself, on my way back from picking up a trailer full of composted manure for our garden. I was dressed in work clothes after having spent the afternoon putting in posts to protect this year’s garden from deer.

I’d had an 18-year-old homeless Native American man on my heart, who attends Tierra Nueva fairly regularly. Since he has no fixed domicile and no cell phone, I never know how to find him.  I decided to park in downtown Mt Vernon beside a boardwalk along the river where homeless people often frequent. There before me was Nathan (not his real name), walking along the boardwalk. I jumped out of my car and yelled towards him: “Nathan! I’ve been thinking about you.”

He stopped, looking surprised. I locked my car and joined him, walk with him for a mile or so towards the next town. He mostly responded to my questions. He didn’t know much about what was happening with the virus, didn’t know where he would camp that night. He told me he felt God was with him, but wasn’t able to explain how. We prayed together and he agreed to take flyers, handing them out to others he would run into. We agreed to touch base on Facebook messenger so we can meet up in a park for a Bible study.

As the sun was about to go down I headed back down the boardwalk until, approaching an older homeless man who looked cold and miserable. I stopped more than ten feet from him as he began to sneeze into his arm.

I asked him if he’d like a flyer with Psalm 91, and information on the coronavirus. He seemed eager for some kind of connection and gladly received. I asked him if I could pray for him and he looked surprised, saying he did.

I raised a hand towards him and declared Jesus’ love over him. I blessed him with God’s love, peace, freedom from fear, protection, healing and whatever else I could think of. His face became calm and radiant, and he suddenly burst out: “Look at the light!” The sun was just setting through the trees above the river bank on the opposite side of the river, illuminating our faces as I turned. He thanked me and I moved on down the boardwalk.

I could see another group of three homeless people gathered around a bicycle. As I got closer I saw a middle-aged woman and two men, talking quietly. I approached them, offering them the flyer with Psalm 91 and the virus info.

They gladly received the flyers, telling me they were starting to get more worried. One of the men knew about Psalm 91, mentioning the pestilence, which he pronounced “pentilence”- a strange combo word that perhaps prophetically put together penitence and pestilence.

I offered to pray for them and they gladly received my blessings from a distance. I continued on, offering my flyer to a Mexican couple, and some Spanish-speaking young people. As night descended I returned down the board walk towards my car, walking past the three homeless people. One of the men called me over, asking if I knew where he could get a coat. He had just been released from jail and only had a thin long sleeve shirt—hardly enough to protect him from these cold nights.

I was able to help him out with a coat, heading home with a warm heart- loving that I was able to share in Jesus’ joy in ministering in a time of need.

May God richly bless and inspire you as you refuse anxiety, seeking first Jesus’ Kingdom in these dangerous times. Below I’ve included a suggested statement that might inspire you are you reach out, with care and courage.

“Hi, I’m _________ from the Christian church/es, and this is ­­­_________ ­­­­­­. We are out praying and raising awareness tonight about the coronavirus. We’re in a critical time where lives can be saved. We’re especially concerned about the most vulnerable—the homeless, people struggling with addictions, and the elderly. We believe God especially cares about all these people—and we do too.

We ourselves may be carriers of the virus, which is why we’re going to keep our distance from you. Anyone can be a carrier—you yourself. Even if you don’t have symptoms. Here’s a powerful Psalm, Psalm 91 and another prayer that you can read or pray. On the back there’s some info about how you can keep safe and healthy so our community won’t be hit too hard. We’d love to be able to pray for you right now if you’d like—for God’s protection, healing, anything you want.”

Check out our weekly and daily podcasts and devotionals here.