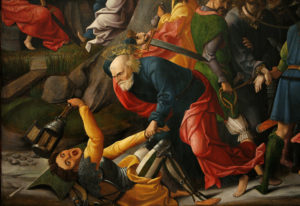 In a recent trip to a 99% Muslim country, Gracie and I had the opportunity to have long conversations about Jesus with an Islamic scholar. He was fascinated by Jesus, and amazed to hear about him differentiated from Western materialism, colonialism, and American military actions. I have since found myself noticing things in the Gospels that I know would be good news to my new friend.

Peter is presented in two of the Gospels as coming against Jesus’ mission as suffering Messiah, who “must go to Jerusalem, and suffer many things from the elders and chief priests and scribes, and be killed, and be raised up on the third day” (Mt 16:21).

“God forbid it, Lord! This shall never happen to you.”

“Get behind me Satan! (Mt 16:23), says Jesus in his strongest ever rebuke. Jesus’ words here reveal that there is high-level spiritual warfare that targets Jesus’ way of defeating evil through the cross.

Have Jesus’ followers continued to rebuke Satan, the ruler of this world, as adviser behind refusals to follow Jesus’ way of redemptive suffering since his death and resurrection?  Not nearly enough!

The church built upon the old Peter (pre-Good Friday) has colluded with empires and endorsed violence (Constantine, the Crusades, colonization, slavery, modern wars, death penalty and national defense).  Jesus shows us another way.

When the authorities come to the garden in search of Jesus the Nazarene he steps forward saying: “I am he” (ego eimi)—identifying himself as the Lord who reveals his name to Moses when he called him to liberate God’s people (Ex 3:14). Jesus’ self-revelation causes his antagonists to fall to the ground. He is clear about his identity, exercising true spiritual authority through the power of the word.

In contrast, Peter steps forward with his sword. He strikes to defend a king and kingdom he wants to be then and there—of this world. He’s there to defend the innocent victim– and Jesus qualifies more than any other as a reason for “just” war. Peter cuts off the right ear of a man named Malcus, the high priest’s slave.

John’s Gospel exposes Peter’s violence as both ineffective and unjust. The victim is a slave and is mentioned by name. In John’s account Jesus does not heal him. Future readers are meant to overhear Jesus’ orders to Peter:

“Put the sword into the sheath; the cup which the Father has given me, shall I not drink it?”

“For all those who take up the sword shall perish by the sword. “Or do you think that I cannot appeal to my Father, and he will at once put at my disposal more than twelve legions of angels? (Mat 26:52-53).

Peter’s violence appears to weakens him, setting him up for three denials of Jesus— and the denial of his own identity. I suggest that Christians who justify or use violence are likewise weakened, and will be prone to further denials.

In the court of the high priest Peter denies being Jesus’ disciple to inquiring servants, saying “I am not” (ouk eimi)—literally “not I am”— that is, “I am not being in my identity as a disciple of Jesus— ‘I am’.”

Once before Pilate, Jesus acknowledges that he is a king and clarifies something Peter had not understood about his kingdom:

Further he adds to Pilate:

“You say correctly that I am a king. For this I have been born, and for this I have come into the world, to testify to the truth. Everyone who is of the truth hears my voice.””

In too many places around the world Jesus’ disciples fall in line with Peter before his deeper conversion after Jesus’ resurrection and the pouring out of the Holy Spirit at Pentecost. May we choose to follow Jesus afresh and listen to his voice instead, renouncing violence in favor of the power of the word and the way of the cross. This will release God’s power and love into our violent world. 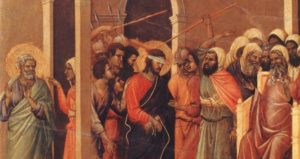