Gracie and I recently returned from a visit to Honduras, where we lived from 1982-1988. Andrew Lewis, our newest Tierra Nueva colleague accompanied us. Tierra Nueva’s Honduran pastor David and his wife Esperanza hosted us for a busy week visiting families and home groups in Minas de Oro and a number of the surrounding villages.

Tierra Nueva’s ministry in Honduras started out in 1982 as a sustainable farming and health education program, with the objective of helping farmers produce abundant yields on small, steep, and impoverished plots. The program was highly successful, involving thousands of farmers. However, regional wars supported by the US increased instability, and free trade agreements benefitting N. American farmers undercut Honduran markets, leading to a massive exodus from the countryside to N. America.

It was heartbreaking for us to witness the exodus of people beginning in the late 1990s, to Spain and the USA, which has only increased—and we are really seeing the impact of that migration now. At that point we decided to help small coffee growers produce for the specialty coffee markets. Tierra Nueva started a coffee farm in 2008, which has been producing increasingly high quality coffee, offering employment to many locals in a very poor and remote mountainous region.

On this trip we were struck by the new home construction in larger towns and even in small villages, all done with remittance money sent home from Spain and N. America. Many people told us that these remittances are keeping the country afloat at a time of extreme poverty and social chaos (Honduras has the third highest murder rate per capita in the world in 2019, after El Salvador and Jamaica).

Thousands of men and women from our region have left their children with family so they can migrate in search of work. We heard many tragic stories of marriages falling apart, of people becoming addicted to drugs or alcohol or losing their lives en route to the USA or through accidents. We heard of others who ended up in immigration detention or in North American jails, finally to be deported back. Many children have grown up in Honduras without one or both of their parents, with huge impact. Many shared with us how they are convinced they must seek a viable future in Honduras. But this is extremely difficult.

Choosing to stay in Honduras may well mean sacrificing dreams of enjoying many of the basic comforts and conveniences we take for granted in N. America. Now that most villages have electricity, everyone is aware of the vast array of desirable consumer products and the allure of the American Dream.

Functional advertisements for migrating to N. America are visible to all in upscale houses and nice cars acquired with money earned by hard working immigrants living abroad (see photo below). Subsisting in Honduras may mean not being able to afford putting your children through high school, since secondary schools are in larger towns, requiring people to cover their kids’ room and board they cannot afford.

International coffee prices plummeted this year due to over production in Brazil, causing many growers to abandon their harvests. Global heating is taking its toll on Honduras’ agricultural production. In 2019 it has only rained two months, rather than the usual five. This devastated the corn harvest in a way that will lead to widespread scarcity in 2020. The politicization of public sector employment means anyone with a high school degree or above cannot find a job if they do not belong to the governing political party. This blocks half the population. Unemployment is at 80%. A rural laborer earns $5.50 per day.

We talked to Memphis, the 23-year-old daughter of a close friend we’ve known since she was a little girl. Memphis found work in a sweatshop (Maquila) in Honduras’ second largest city, San Pedro Sula. She works from 6pm to 6am, four days on, four days off, making $120 per week. She lives in a dangerous, gang-controlled neighborhood, where she must navigate with extreme caution on a daily basis. She told us that thousands of young people like herself work in sweatshop-type clothing factories.

Many consider it safer to risk the treacherous overland journey through Guatemala and Mexico to the United States in hopes of earning higher wages, than living in gang-controlled slums and working in the maquilas in San Pedro Sula, which is currently the murder capital of the world.

We were deeply encouraged to talk with many of the adult children of our original Tierra Nueva agricultural trainers and health workers, who have decided to stay in their villages and raise their families. David’s daughter and her husband run a mobile butcher operation, selling meat to villagers. Another promoter’s son, Noe, has a three-wheeler taxi that he uses to transport customers to and from the smaller villages surrounding their town. Others grow coffee or corn. One runs Tierra Nueva’s coffee farm and mill.

David’s son Wilson earned a decent wage, working for a large palm oil plantation on the North coast of Honduras, an area of increasing violence due to drug trafficking. When his wife’s 20-year-old son from a previous marriage was murdered, they decided to relocate. They are now happily settled into a mountain village, and oversee Tierra Nueva’s specialty coffee farm.

We visited the coffee farm and met and prayed together with a group of twelve or so young adults who were picking the first round of this year’s harvest. Tierra Nueva’s coffee farm provides work for 30 people for the three-month harvest period. Coffee pickers can earn between $8-12 daily, depending on how much they harvest. The farm provides regular employment for 3 full time workers 6-8 others who maintain the farm throughout the year. Consider ordering some highly rated and delicious Tierra Nueva Farm Coffee through Fidalgo Coffee Roasters here, and help provide jobs.

David focuses most of his attention on pastoring people in extreme poverty, Tierra Nueva’s top priority since 2008. Each day we visited families that he pastors on weekly rounds, leading Bible studies, listening to their stories of the challenges they face and praying for them. Check out this December 16 video interview with David here.

In the midst of all the struggle and difficulty God’s love and power was clearly evident. We saw God healing hearts, minds and bodies on multiple occasions. One such example is an older woman named Doña Rosa.

Gracie, David, Andrew and I prayed for Doña Rosa, who hosts a weekly Bible study at her shack on the outskirts of town in one of Tierra Nueva’s Hogares en Transformación (Households in Transformation). She lives with her two daughters and ten or so grand children up a steep trail on a mountainside. She asked for prayer for healing of a painful tumor on her breast, that had kept her from sleeping and was suspected to be cancerous. The day after we prayed the tumor ruptured, her skin went back to normal color and all her pain and swelling left.

In one village where there’s been a lot of family feuds and vengeance killings we prayed for family members grieving the death of their father, who was shot and killed a year ago. One of his sons feels called to serve his community, and is one of the young leaders that David is raising up.

David feels that one of the top priorities in the following year is training people in inner healing prayer and trauma therapy. We hope to return to offer this training sometime in 2020.

Tierra Nueva Honduras needs new supporters to cover the $1,075 monthly budget to keep the ministry moving forward. This money covers fuel and vehicle maintenance costs, refreshments, and a modest salary for David, which allows him to visit households, lead Bible studies, train new leaders, oversee and maintain the coffee farm, and pastor Tierra Nueva’s church in the village of Mal Paso. We also need $7,100 for coffee farm improvements for 2020. If you feel led to give, donate online here. Otherwise send gift earmarked “Honduras” to address at the bottom of this email. 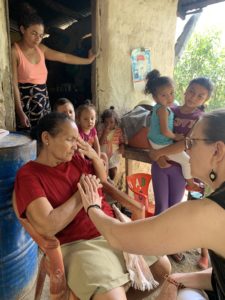 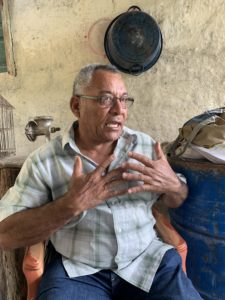