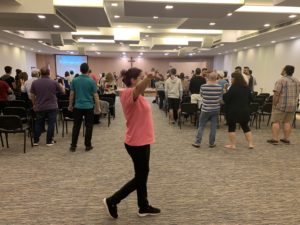 The crisis in Syria has been on my heart in a new way this past week, when Gracie and I were in Beirut, Lebanon. We were part of a team that offered four days of training in evangelism and prayer appointments to 65 Syrian Christians who came over for Damascus.

We were deeply impacted by the humility of these Syrian believers, who have gone through devastation on so many levels. Everything that could be shaken has been shaken, and yet a vibrant faith remains, visible in a thirst for God and eagerness to learn more.

One woman told how over 13,000 bombs fell on her city over the past nine years, but only 100 were killed (a small but still horrific number considering the number of bombs). She attributed this to her faith community’s constant intercession. She said that there are many testimonies of people deciding suddenly to walk away from a particular place that was subsequently hit by a bomb. She said many came to believe in God due to widespread stories of protection.

We met people from Aleppo who saw their city destroyed by the fighting. It seemed everyone had lost people they knew or had family that lived abroad as refugees- some 2 million of which are in Lebanon. We visited a Lebanese Christian outreach to Syrian refugees near the Syrian border that brought education, clothing, food and medical care to thousands of vulnerable people.

On the last evening of our time together I felt led to apologize and repent as an American citizen for the US’s role in the upheaval in Syria.

The US invasion of Iraq, the arming of militias in Syria and the US arms industry have all contributed to so much death, and destruction. The US President’s decision to pull out US troops from Northern Syria happened while we were there, deeply worrying everyone as Turkey immediately invaded. We met a Kurdish couple studying theology in Lebanon who were deeply troubled—feeling the betrayal and concern for the safety of their families and community.

Many of the people were crying as I apologized, and as the other Americans in our team joined me to express our disagreement with our government’s past and present actions. The next day one of the Syrian leaders expressed her community’s appreciation for our apology.

Now is a time for followers of Jesus to differentiate ourselves from our nation’s policies, since we are first and foremost ambassadors of Jesus and the Kingdom of God. We must be fully aligned with the God who protects and not with agents of death.

While I am not an expert on the Middle East, a few big questions come to mind as I watch events unfold.

Turkey’s Air Force has been supplied largely by the USA. The United Stated provides 60% of Turkey’s arms—including the 2,400 Main Battle Tanks and over two-thirds of Turkey’s more than 3,600 armored personnel carriers that are being used to invade Syria now (read more here). Germany, France, Spain and Italy have also been actively supplying Turkey with weapons—as well as Russia. These weapons are now being used against the Kurds, a longstanding enemy of Turkey.

Turkey has an authoritarian leader who is responsible for many human rights abuses, read more. Currently the United States has nuclear weapons located on Turkish soil, an additional vulnerability and pressure point to please the Turkish leader.

The US and Western Europe have used the Kurds as front-line troops in the war against ISIS, leading to the death of some 11,000 Kurdish fighters. Now the United States has abandoned them, and is giving Turkey what it wants—a green light to take control of Northern Syria destroying or dispossessing the Kurds of any kind of homeland.

The US President himself says his concern is bring home US troops, something that at face value looks like a positive step—except that in this case the troops were a stabilizing presence in Northern Syria that should have been gradually withdrawn with alternate measures in place (see this article). Already there are over 130,000 new refugees who have fled the Syrian-Turkish border area, and many deaths.

But since Turkey is one of the United States arms industry’s big customers, and a longstanding site for the US President’s personal business dealings, is the President’s green light to let them invade Syria and sudden pullback of US troops aimed a keeping this past and present customer happy and compete with Russia for arms sales? Current talk in the US Senate about sanctions against Turkey must be carefully examined, as critics argue they are politically motivated and could be much more effective.

The United States arms industry is one of the most powerful global forces, bringing in billions of dollars into the US economy, and contributing to violence and oppression.  Now is the time to challenge weapons manufactures and our government officials who support them (see this blog).

Followers of Jesus should be especially clear that our nations’ economic interests are not our highest priority. Jesus directly names Mammon (money, wealth) as a god that must not be served.

“No one can serve two masters; for either he will hate the one and love the other, or he will be devoted to one and despise the other. You cannot serve God and wealth (Mammon)” (Mat 6:24).

The Apostle Paul wrote: For the love of money is a root of all sorts of evil, and some by longing for it have wandered away from the faith and pierced themselves with many griefs.” (1 Tim 6:10).

Weapons manufactured in the United States, Europe, Russia and anywhere else they’re produced are contributing to the death of people all over the world, fueling conflicts leading to present and future refugee crises. Jesus makes a clear statement to his disciples regarding his commitment to life: “the Son of Man did not come to destroy men’s lives, but to save them” (Lk 9:55-56). As followers of Jesus let us stand in agreement with Jesus and challenge our government and weapons manufactures as we bring comfort and concrete support to the vulnerable. 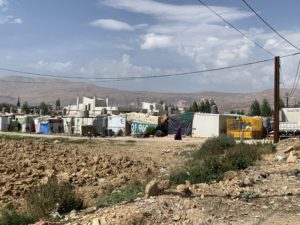